Ivy flat caps are favorite good ol’ dad caps. The ivy style cap has a non-sectioned crown that tapers toward the bill giving it a distinctive flat profile.  These caps come with a structured crown for a traditional look or one that is totally designed for a casual look that works for an active lifestyle.

Popularized by the working man, the flat cap crossed over to become a leisure hat for golfers, drivers, and the college crowd. It fills the gap between a ball cap and a fedora. Today, people get nostalgiac when they think about how it really was a favorite cap for their dad and grandpas. Flat caps have followed the trend to becoming a unisex cap with its appeal to guys and gals alike. Still, you either like it or you don’t. There is no middle ground when it comes to its classic style.

Good fully lined caps with a buckled slider on the back that can be adjusted to  comfortably fit most heads. Reduces worries about loosing your cap to the wind, simply snug it down a bit more.

With all the new ivy flat caps made for the cooler weather days, a virtual festival was made showing all the caps.

Check out the available ivy flat caps below. If you don’t see what you are looking for, please press here to contact Rawls-Riley Creations for assistance. 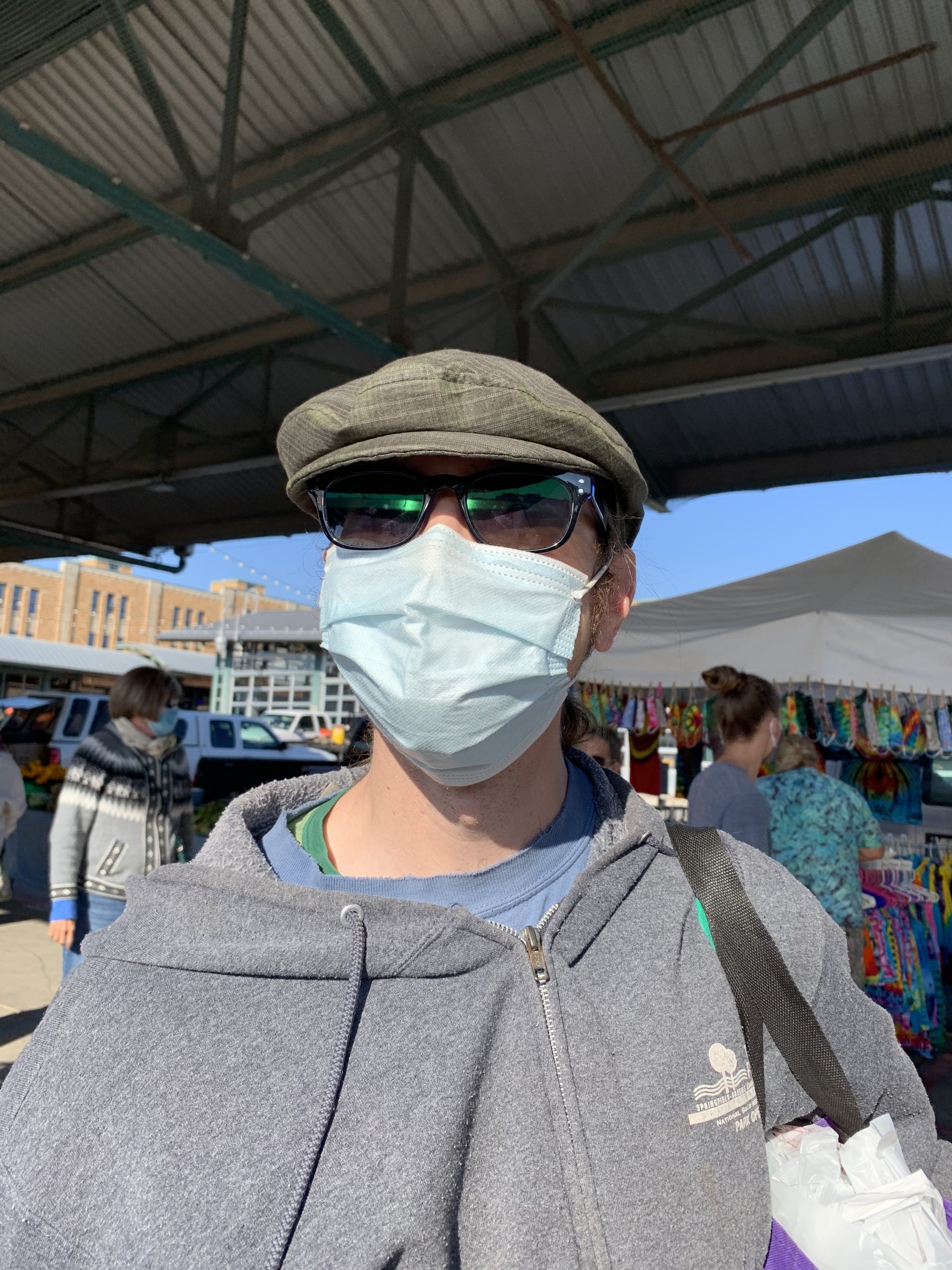 Stopped for an Ivy Flat Cap

He stopped when he saw the ivy flat caps at the Farmers Market and had to see which of the two would work best for him. He liked a homespun check and the green plaid. He said he has taken a look at these kind of hats at different places over the years and was very pleased to see me there with mine. It was the green one he went with and was very pleased to let me snap a quick picture.

Where’d You Get That Hat?

It was the black and gray big check one in flannel that was a real draw for the teen. He came to the KCMO Farmers Market that day with his mom and brother and they were impressed at how the cap was perfect on him. They shared that they had a sister and another brother at home and would give it more thought on something for at least him. Off they went.

A bit later they returned with good news about how he was getting lots of, “Where’d you get that hat?” as he walked through the market. He showed them my business card and told them to stop by and check them out. The other brother found a plaid cap he wanted liked, too, and they got one for the brother who stayed home that day. The plaid one he got is pictured to the right. 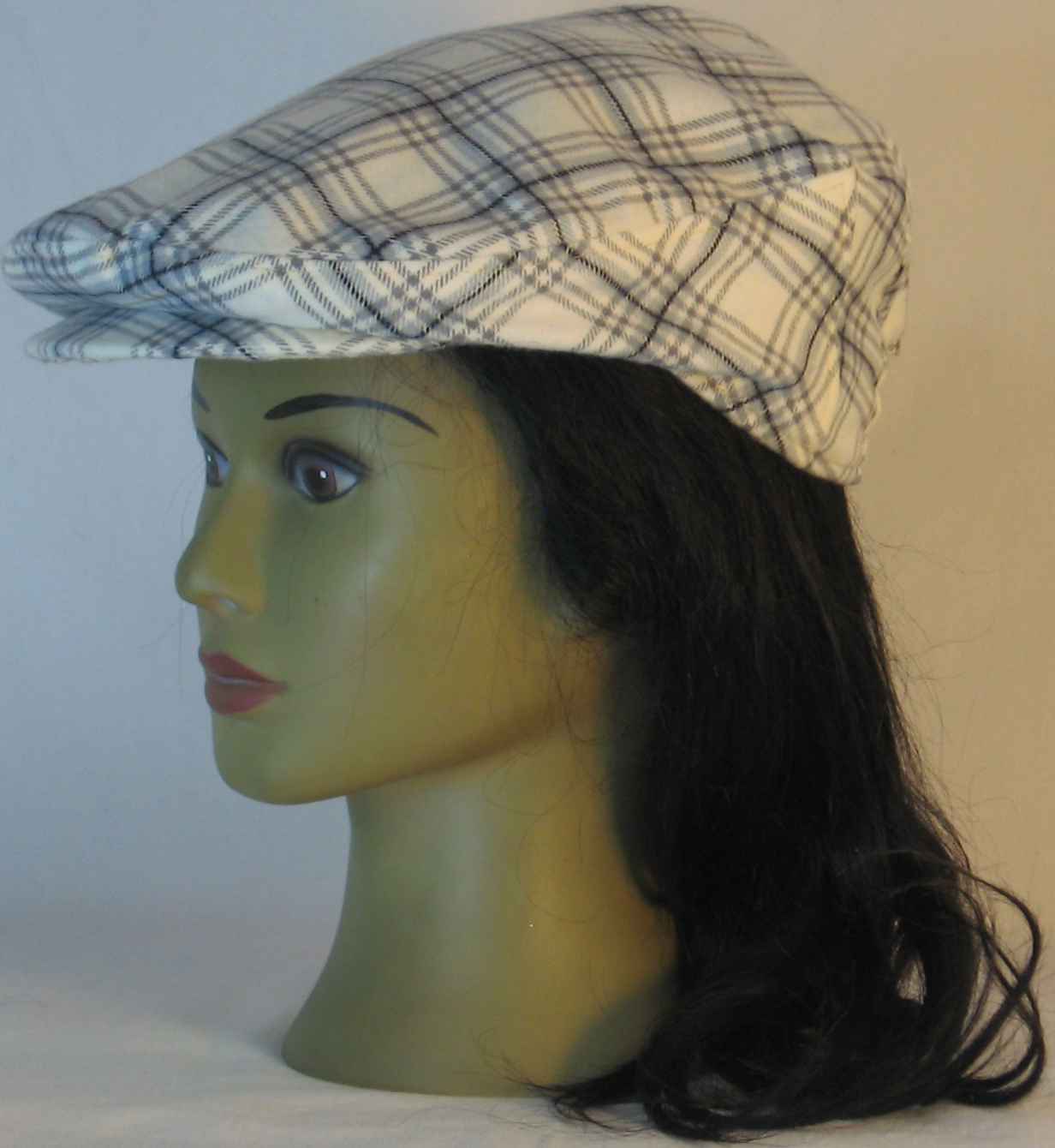 It was the first big showing of the flat caps and, oh my, how they were making their way home with the guys and gals at the Wamego Tulip Festival.

Two gals were room mates and they settled on a flannel, flat cap in pink and gray plaid that they would share.

A younger guy selected a brown, stripe he liked. He returned later to get it with his older buddy who quickly turned the flat cap around. The same flat cap was selected by a guy who garnered approval of the look from the two gals who were accompanying him.

That same popular brown stripe, flat cap in suiting material continued its demand at Wamego the following year when it was a good choice for a guy who got off without his hat. 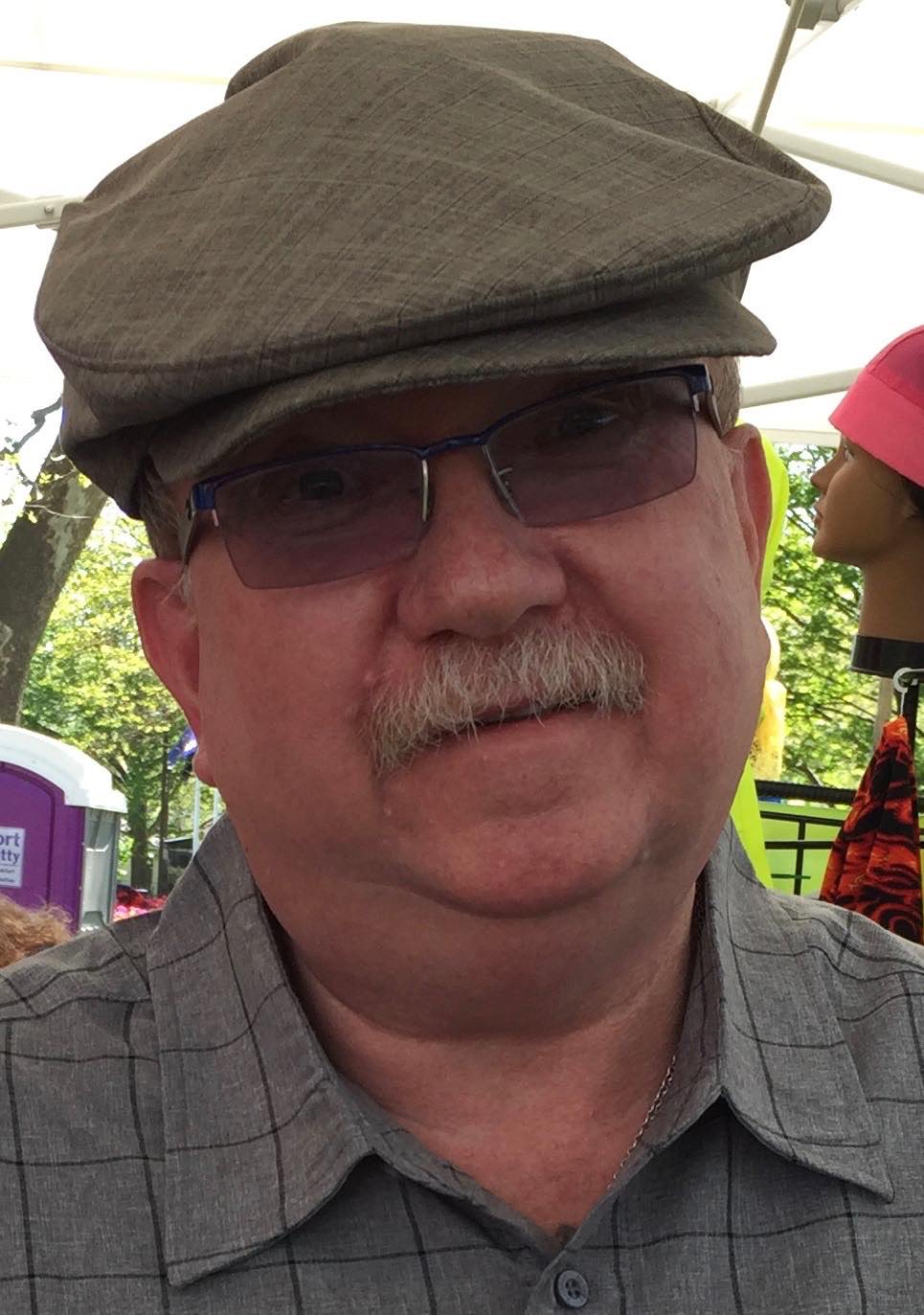 The lady stopped by the tent at the Wamego Tulip Festival and thoughtfully considered what she would like to get. After several rounds, she settled on the ethnic-print, flat cap in colors of orange, pink and green that had Africa imprinted on it in glitzy, gold.

The next year, she stopped by again and was pleased to share, “I love the hat!” She wears it often. That year, she got an animal-print head wrap. Press here for head wraps.

She selected a floppy hat with two hat bands the following year. With the bands being interchangeable, she will be able to have two looks with the same hat. Press here for the floppy hats.

It was so nice that she stopped by the second day wearing the orange band on her hat and let me snap her picture. 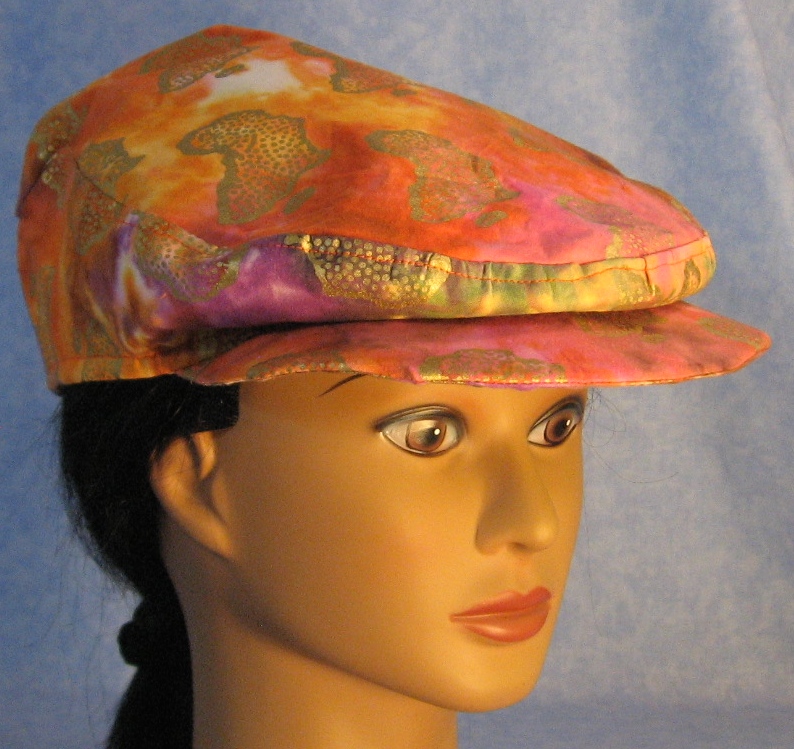 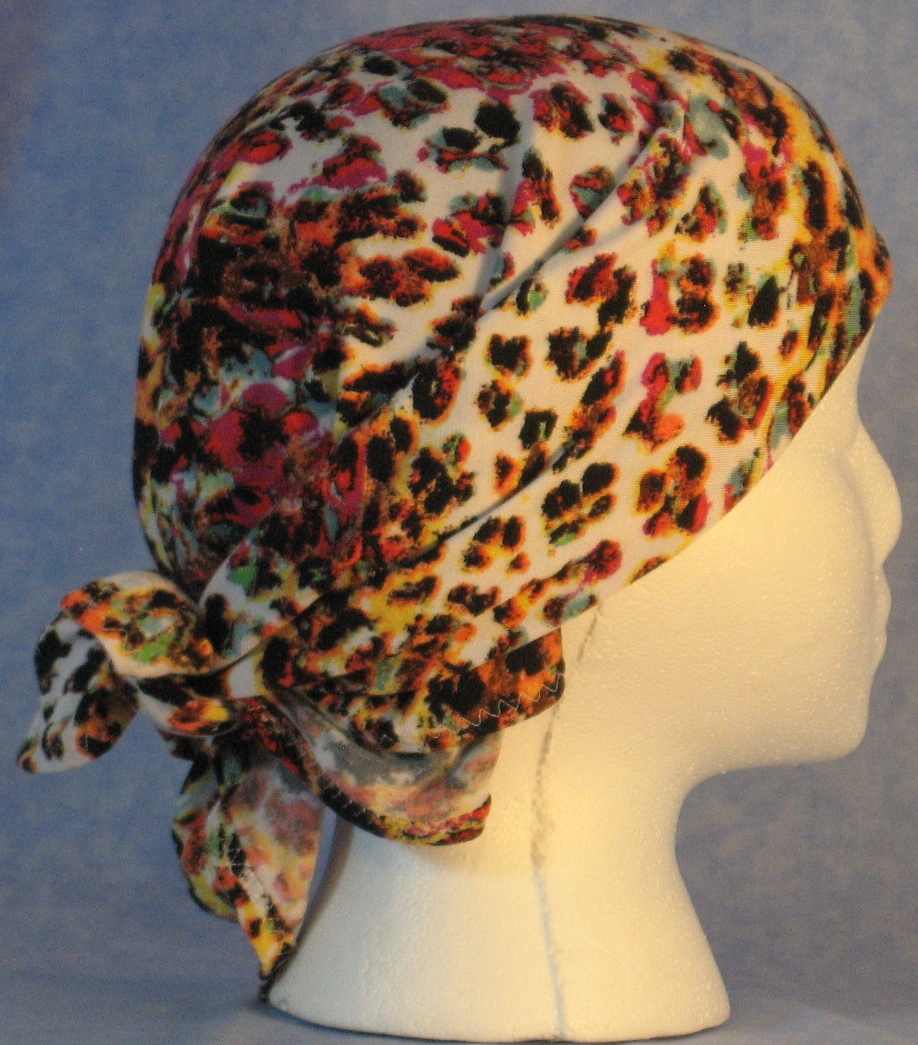 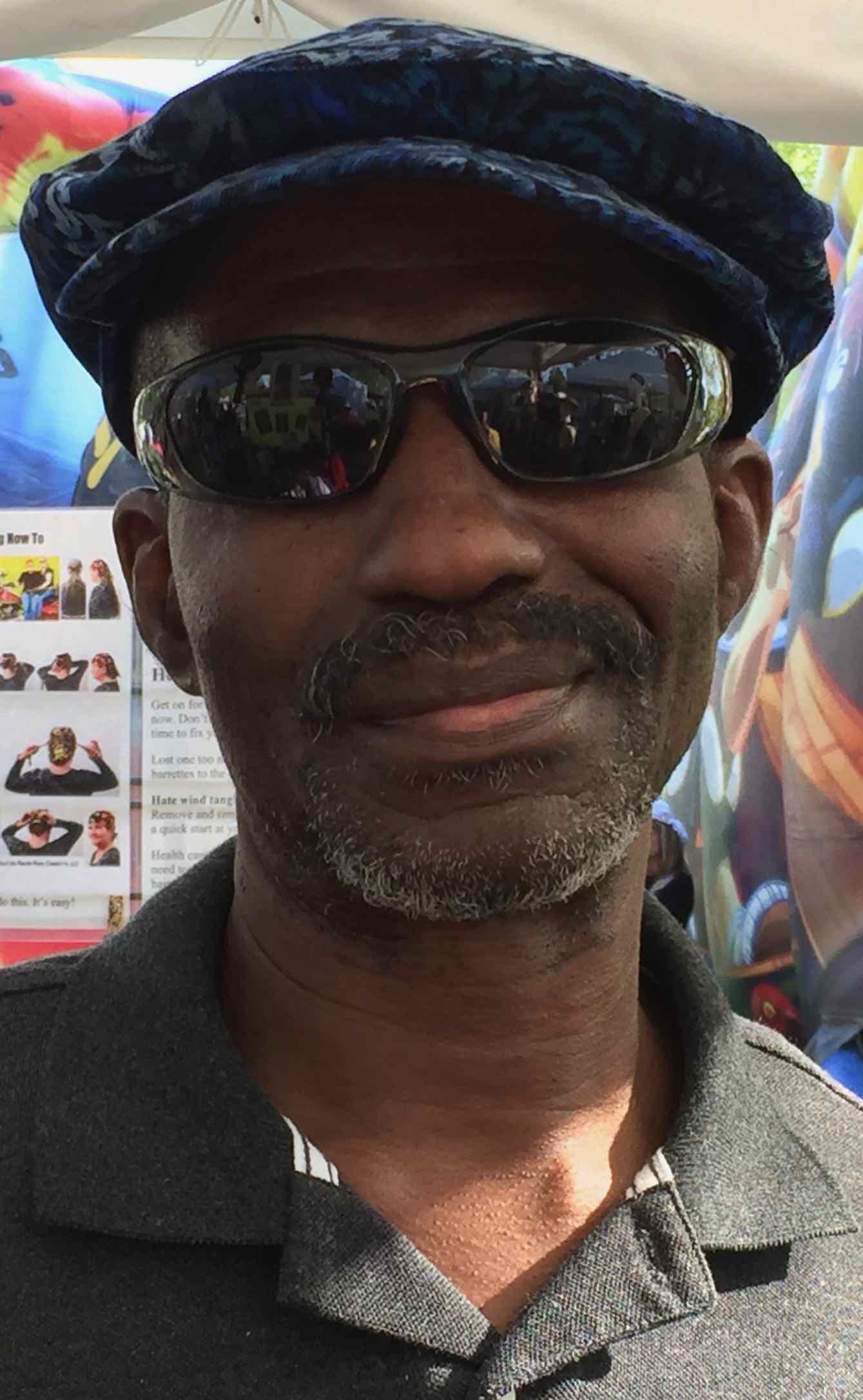 At the Pella Tulip Market, he was compelled to check out the flat caps. He was pleased to learn that there were not going to be lots of people with hats like these because they are only made in a very limited quantity by me. After trying on the gold and black one, he declared it would be good for church and other formal occasions, but not as practical for everyday wear. With the wearability and sturdiness of corduroy in mind, he selected the blue and black flowered cap which has a very Renaissance look to it.

Later that evening, he shared, “Everything was great Becky was great she took my picture…i will buy more caps from her.” as well as, “I was happy with my purchase.”

Seasons Change and So Do Flat Caps

Making a choice was difficult for the gentleman who came to the Rawls-Riley Creations tent in Wamengo. He settled on the two. The white for summer and the darker, brown for winter.

At the Amelia Earhart Festival, a guy saw the lightweight, white and gray colored, flat cap. He tried it on and asked his wife what she thought. She said the three he already had were not the light color like this one and the one he had for work did not count. He went with this one because it complimented his white beard. 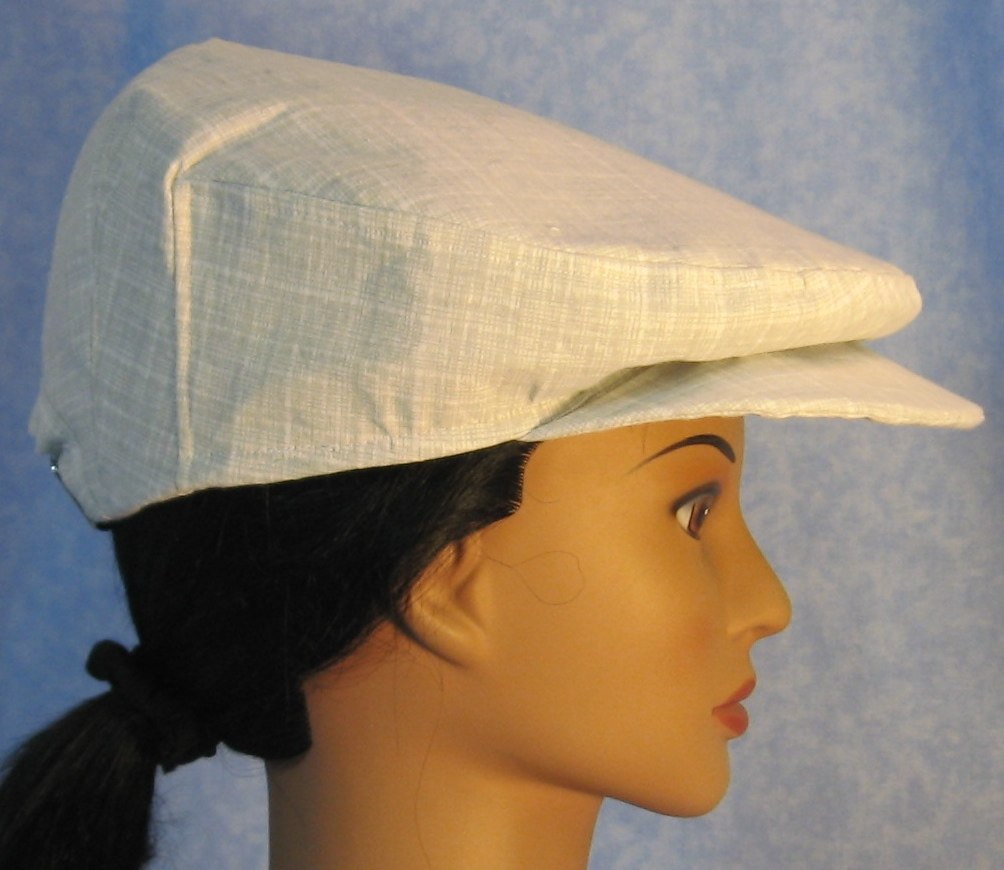 The first guy to buy the blue and white  colored, homespun flat cap came to the show and had gotten off without any of his six or seven other flat caps. He had thinning hair and the sun beating down made it a perfect day for the nice, new one. 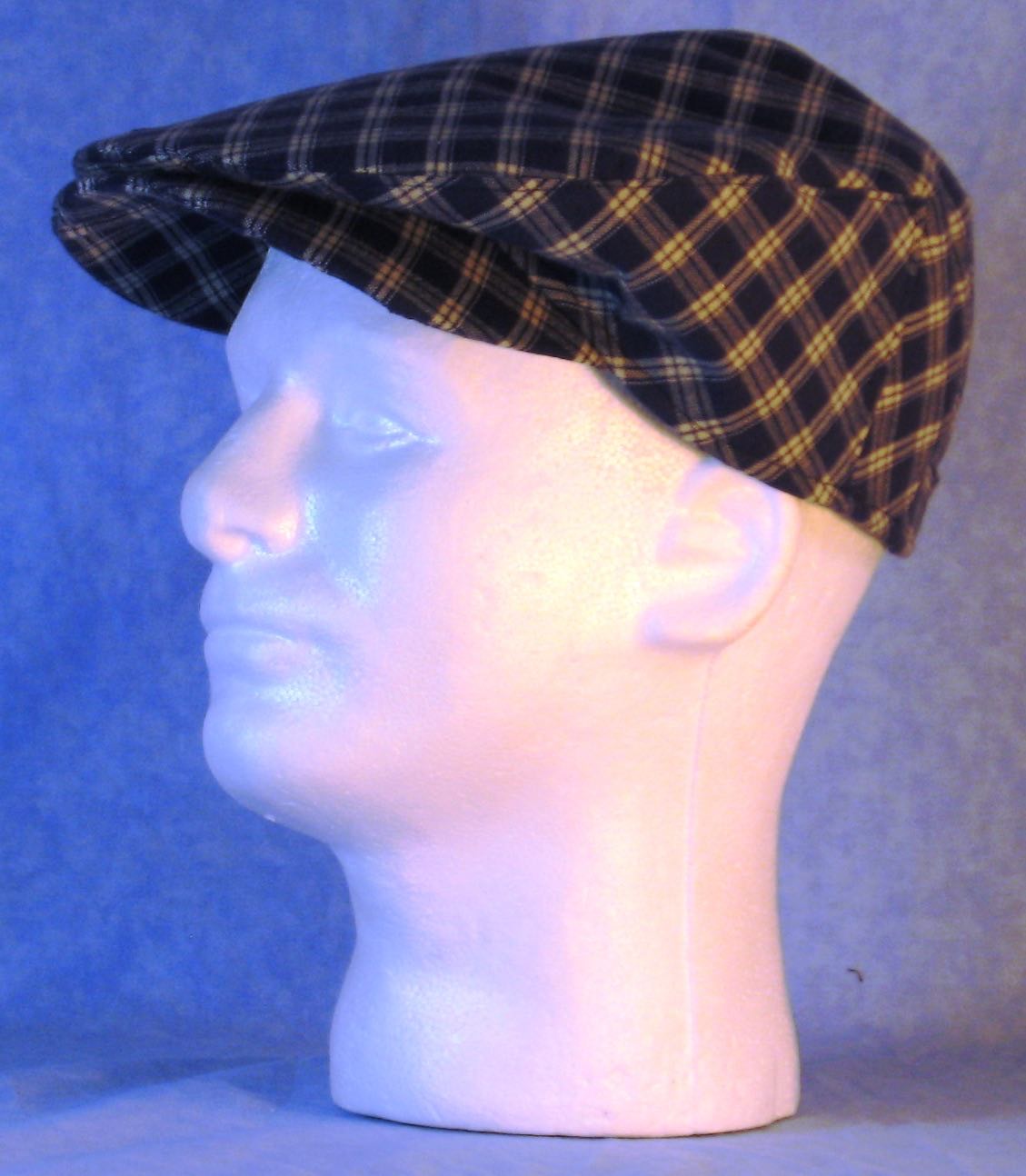 At the show, the guy said he already had seven or eight flat caps, but could not pass on the brown, plaid, flat cap. He said he thought it was well made.

At Cassoday, a grandpa was so glad to get flat caps for the two grandsons. The adjustable back made them work well for both of them. At a show, about a month later, the dad stopped by with the youngest boy and shared that the boys still enjoyed wearing their “motorcycle” caps. The brother said his brother wears his everywhere.

She saw the flat caps at the Lawrence show, but had just arrived so she still needed to check things out. It was the purple brocade one that brought her back. She looked outstanding in it and was pleased to pose for the picture. It suited her nicely and even matched the purple in her hair. 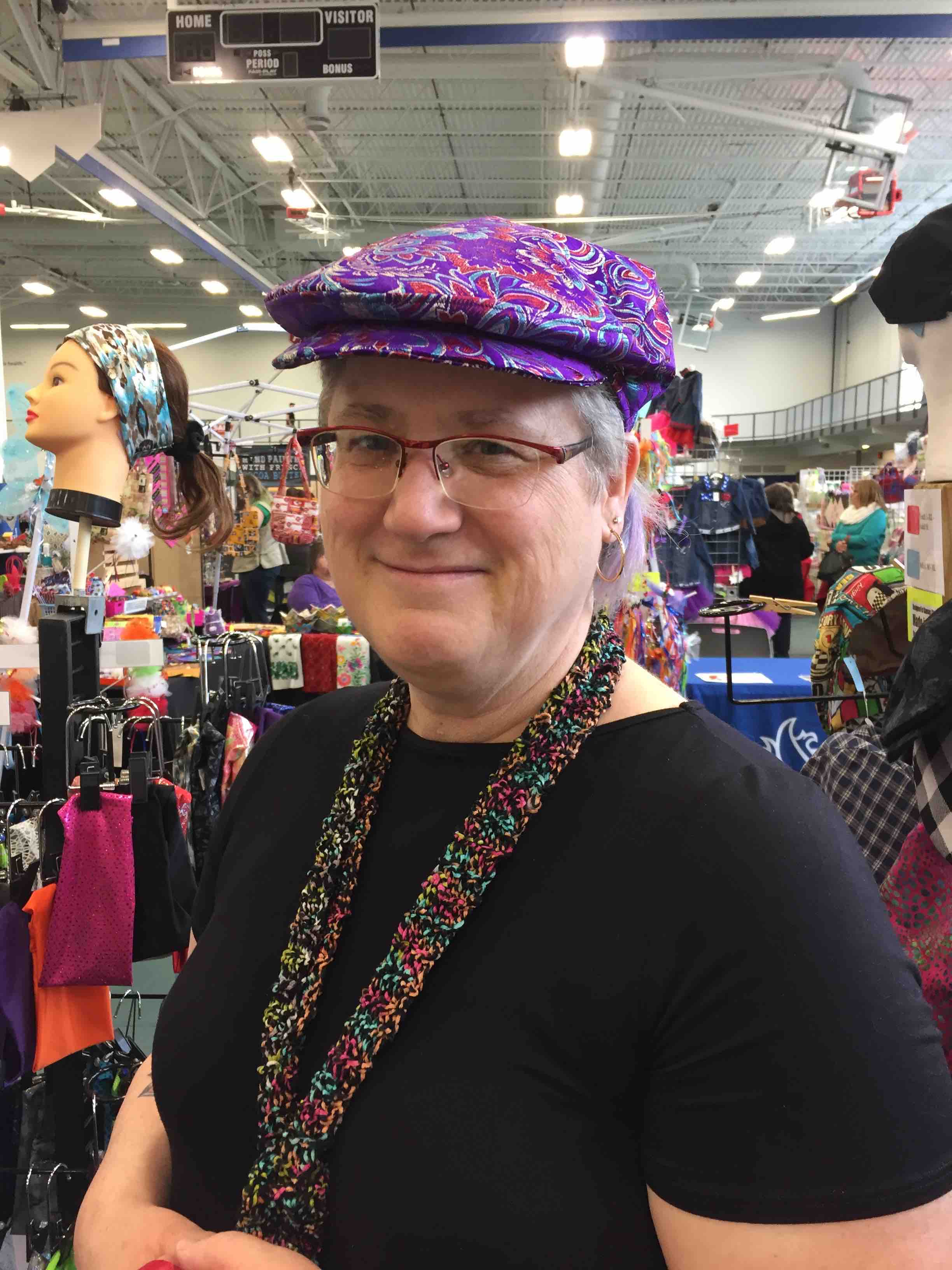 She got her hair bag do rag at the Lawrence show.

Later, it was the flat caps that caught his eye. He really liked to looks of the brown one and tried it on. He turned to get an opinion and she said it made him look like he was going to a coffee shop. She really liked it on him.

They both looked good in their new headwear. Check out the hair bag do rags like she got by pressing here. 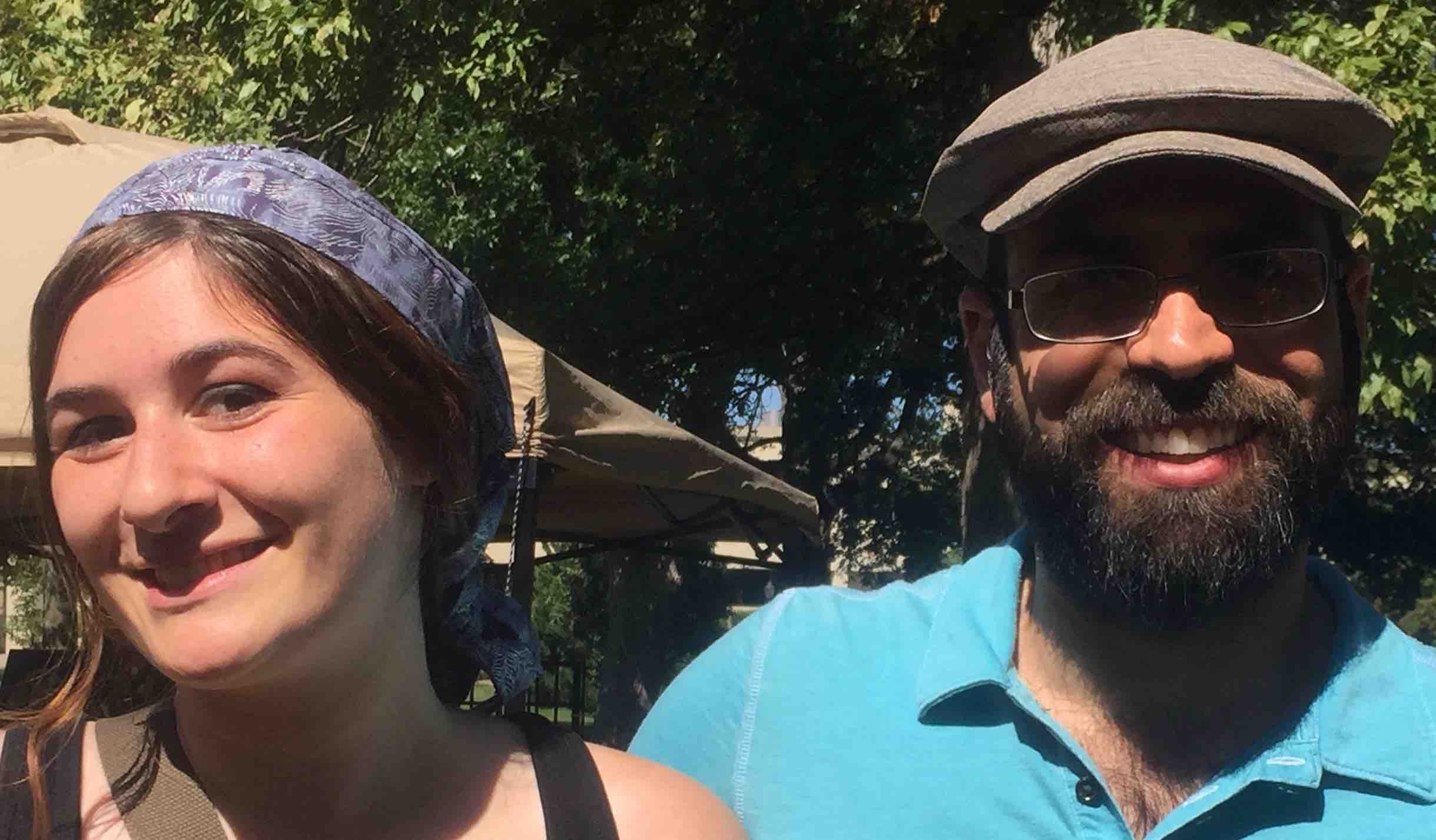 He studied the flat caps and she really liked they way they looked on him, but he really could not go for any of them. She explained that he had a favorite hat that he has used for every cruise they have gone on and it is really worn out. The issue? It was white and there were no white flat caps on the rack.

When he learned that I designed and made all the headwear, he had to give it more thought. He shared they really like to go on cruises and he had looked forever to find another white hat. Thus, Kevin got the first, white, flat cap.

I Am a Huge Fan

Let the good times roll when you wear a flat cap in colors that make it obvious that you really are a huge fan.

Mike is a huge Miami Dolphins fan who needed a big flat cap. He was the first to ask about getting a cap made that would uniquely show his favorite colors in plaid. When he selected the plaid, he let me know that “It matches the retro Miami Dolphins colors from the 80’s, I love it.” Thus, he is the proud owner of the first of its kind flat cap.

“Thank you for creating this flat cap for me. It’s perfect. I love it. I will definitely recommend you to all my friends and family.” – Thanks, — Mike P. 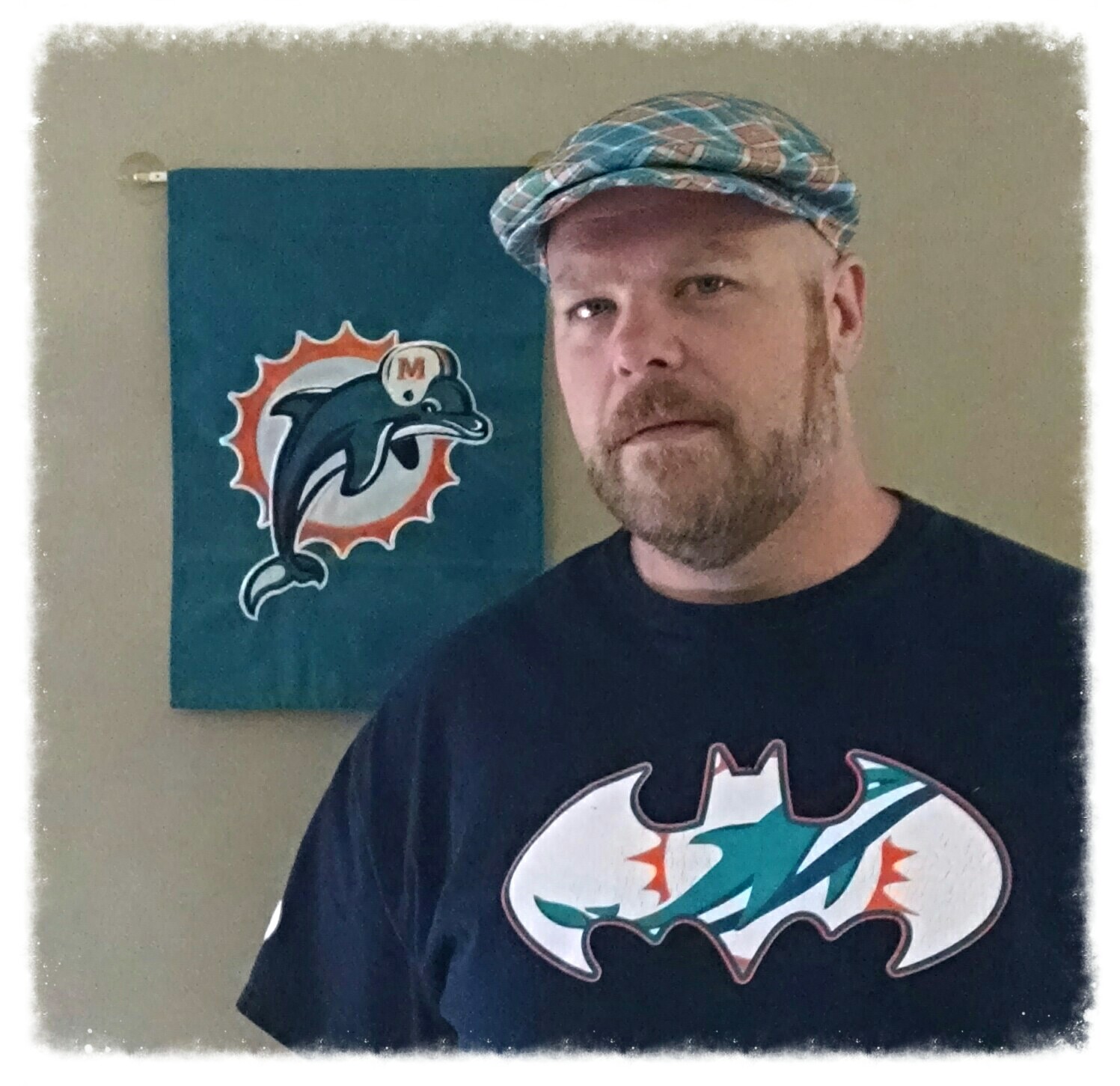 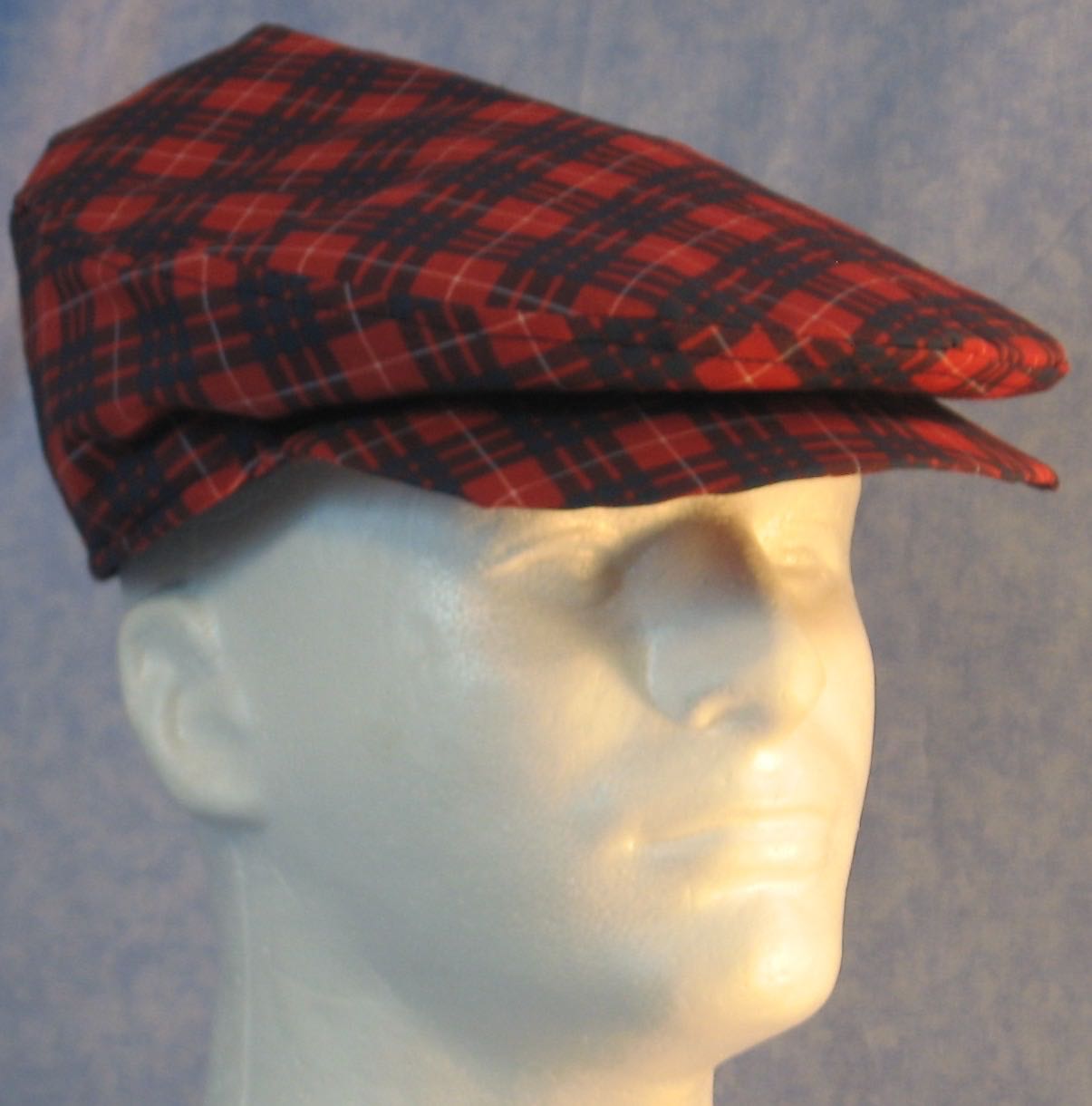 Just in Time for the Holidays

Paula emailed, “I visited with you at Maple Leaf regarding a driving cap made with KU fabric.” That started the process for a flat cap in KU colors. When selecting the plaid, Paula shared, “I am wanting to use this as a Christmas present, but have to mail it to Rhode Island. Will there be plenty of time for that?”

Absolutely. In just a few weeks, she had selected her plaid and the flat cap was shipped off to her in plenty of time to make the gift delivery.

The ivy flat cap has a non-sectioned round shaped crown that tapers toward the short bill to form its flat profile.

These caps come with a structured crown for a traditional look or one that is totally designed for a casual look that works for an active lifestyle.

The back has a buckled slider which gives the hat a perfect fit. If it is really windy, just slide it down a bit more and forget worrying about losing it to the wind. 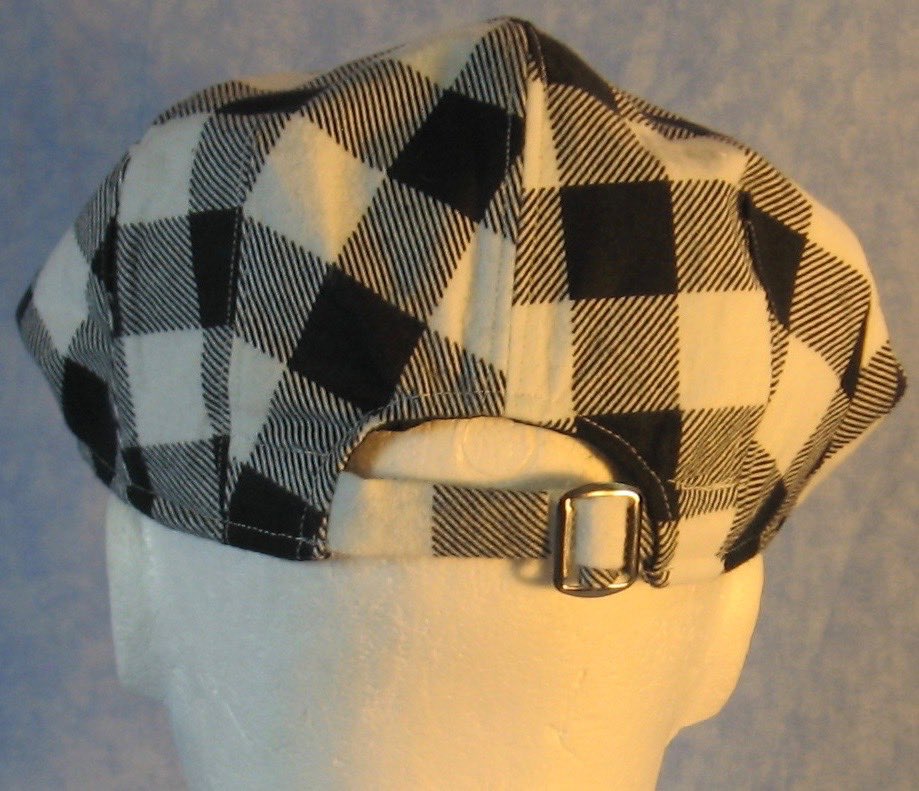 Fully lined cap. The bill is firm and may be adjusted as desired to avoid those pesky sun rays.

The sweatband had enclosed terry cloth (noted in the details about the cap) or is comfortable CoolPlus® (Macro International Pattern #Micro-655) wicking. Content: 55% CoolPlus® + 45% polyester.

Get the Cap that Matches Your Style

This type of flat cap has been around for years. These caps come with the traditional stuctured crown or an updated relaxed crown. Be it a formal or casual look you want, you’re sure to find one of these caps just the right cap for your lifestyle.

All of Our Ivy Flat Caps —

All of our flat caps in the ivy style are original designs by Rawls-Riley Creations. They are 100% made in the United States of America.

Press here to see the archive of the ivy flat caps.

Other Cloth Caps to Check Out 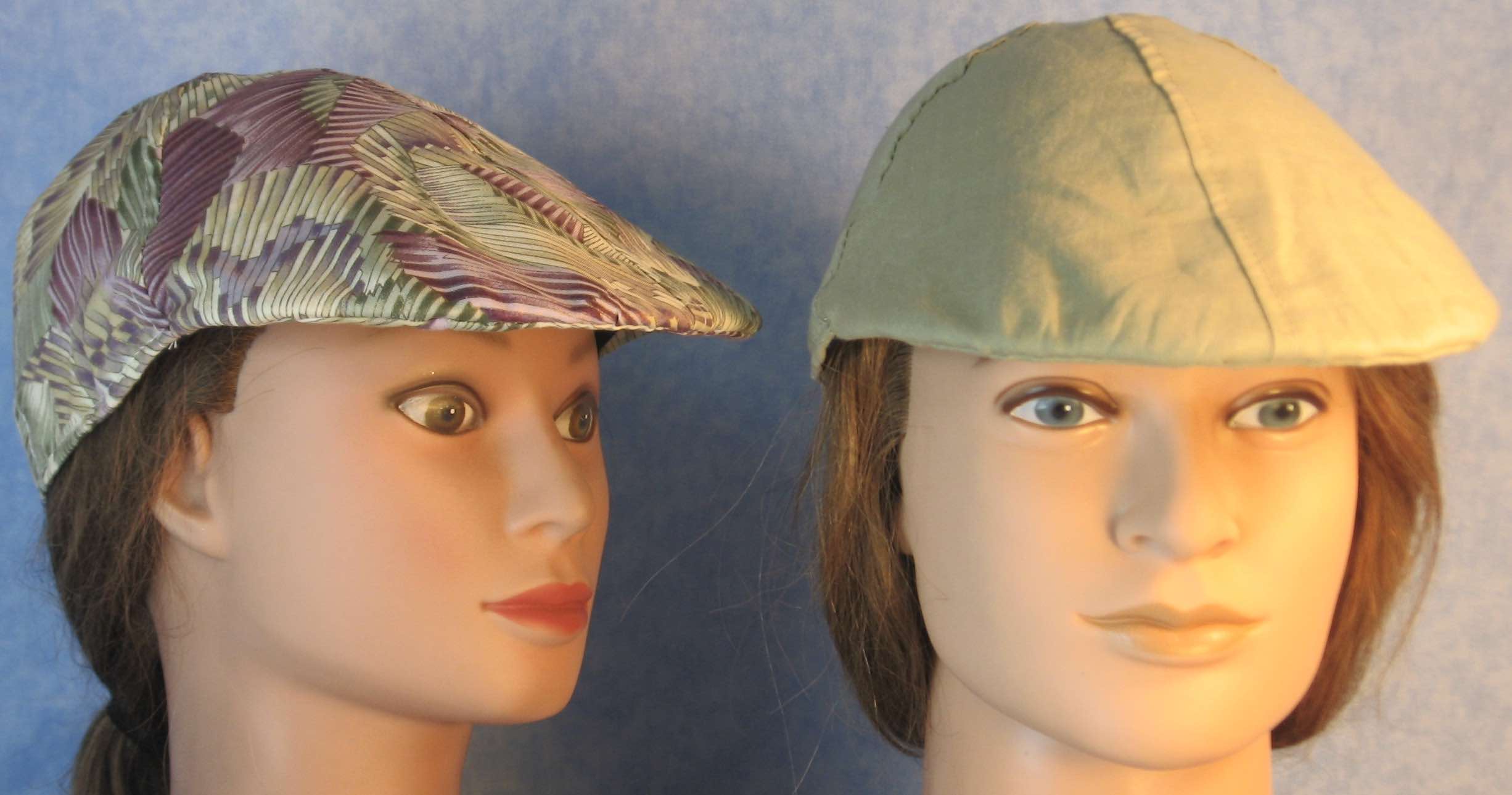 Fisherman caps, with relaxed crowns, are a historically trendy must-have for comfortable casual headwear. Referred to as biker caps, too. Press here for the fisherman caps / biker caps.